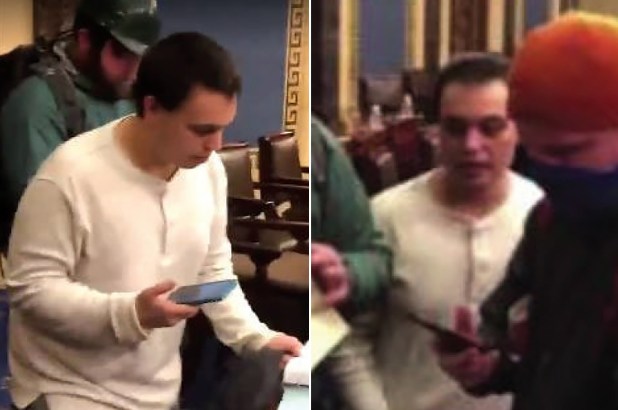 Christopher Moynihan of Salt Point, NY, was busted on Feb. 25, 2021, after former coworkers ID’d him in video footage of the Jan. 6 Capitol riot.
DOJ

A Capitol rioter from New York who broke into the Senate chamber and took photos of official congressional notes and documents during last month’s siege has been arrested and charged, according to federal authorities.

The suspect, Christopher Moynihan of Salt Point, was busted Thursday afternoon after two people he previously worked with told investigators they saw him in video footage of the riot, according to New York prosecutors.

In the footage, Moynihan is seen in the Senate chamber taking photos of official congressional documents that are “believed to detail the objections and votes of certain congressional members on the certification of electoral results,” an FBI agent wrote in a affidavit in support of federal charges against the suspect.

“There’s got to be something we can use against these f–king scumbags,” Moynihan is heard saying on the video as he rifles through the documents, prosecutors said.

Moynihan’s former co-workers gave the feds his cellphone number, and investigators linked it to a cell site near the Capitol on Jan. 6, according to court documents.

The suspect was hit with a number of charges by prosecutors in White Plains federal court, including disorderly conduct on Capitol grounds.

Five people died in the riot — including Capitol Police Officer Brian Sicknick — as a frenzied mob of Donald Trump supporters stormed the building that day in an attempt to overturn the 2020 presidential election results.